[ This article is adapted from IoT Stack: The Need for an Hourglass Architecture ]

Internet of Things (IoT) encompasses different technologies and standards from the sensor to the cloud. IoT is multi-faceted and inter-disciplinary, encompassing a plethora of networking protocols and technologies, using the latest advances in sensors, wireless connectivity, analytics, AI and with the need of security from the physical world to the cyber domain. Under the challenges of having a complete IoT system working, a natural tendency is to have it vertically integrated, build it grounds up, owning as much as possible, very similar to older generations of IoT/M2M deployments in a vertical or silo-ed approach. This is particularly true in the early days when the core horizontal components are not yet matured and standards still emerging. So everybody builds bottoms up. This also has roots in industrial SCADA world where reliability and control are paramount. It was not unusual for a Honeywell solution for building management to have its own dedicated sensor, networking switches and application. Changing a sensor may have required changes in all part of the solution especially the Application. There was no question of working with a Johnson Control equipment. Sensors and other components were calibrated with dependency among each component. So even shifting a device 10 meters away on a plant floor was not a trivial operation. 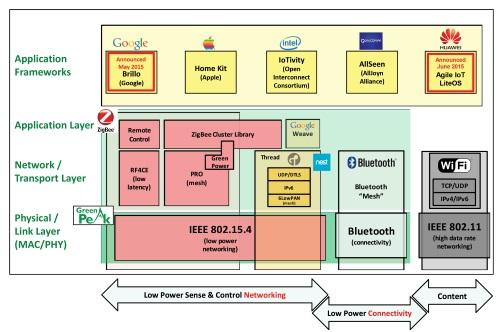 However with the rapid growth of the consumer electronics business especially smartphones the price point of many sensors and the quality increased by quantum jumps. Sensors incorporated Digital Signal processing (DSP) on device and gave smoothed calibrated signal data. This allowed mixing manufacturers and models of sensors. This required decoupling the application from downstream components. The 7 layer ISO model is a great example where a similar decoupling and a layered Hourglass architecture greatly helped adoption. The IoTPlatfrom is the natural evolution to a layered architecture in IoT decoupling the devices and hubs/ gateways from middelware sending data to "on premise" or cloud based application and consumers. The graphic from Smart Home gets another standard illustrates the emergence of a decoupled layer. The biggest surprise is rapid adoption of new protocols like BlueTooth and modernization of older ones like ISA100 standard developed by the International Society of Automation (ISA) officially called "Wireless Systems for Industrial Automation: Process Control and Related Applications".

There is great deal of fuzziness on features of an IOT Platform. In A Survey of Cloud IOT platforms] Partha Ray visualizes the features of the IoTPlatform as follows.

There are over 300+ IoTplatforms and about 20+ listed in The Indian IoT Startup Directory T IoT Applcation Enablement or IoT Platform is seeing considerable activity in terms of acquisitions and new market entrants. After PTC acquired ThingWorx and Axeda, other major software and IT companies have followed. Examples include Amazon acquiring 2lemetry, Autodesk buying SeeControl ,Microsoft acquiring Solair and SAP acquired Plat.one.

The consultancy MachNations defines different type of offerings that are passed as IoTPlatform as of late 2016 <ref>https://www.machnation.com/2016/06/28/eliminating-confusion-machnation-defines-five-types-iot-platforms/</ref>

other ways of classifying IoT platforms would be

Links to Architecture and Interoperability articles[edit]

Considerations in choosing a IoTPlatform[edit]

This is a evolving component