Located in a humble office space near Las Vegas’ McCarran International Airport,Haddington Dynamicsdoesn’t fit most people’s idea of what a state-of-the-art robotics lab is supposed to look like. There are no billionaire tech entrepreneurs riding Segways to meetings with angel investors, and there are no corporate PR-approved mission statements on the wall. Instead, you’ll find a small team of brilliant engineers who are using passion and innovative technology to design a very special robot calledDexter.

When I scheduled an appointment to go and see Dexter, I was expecting to find a standardrobot armthat was designed primarily for affordability. At just $2,999 for a complete Dexter Kit, it’s one of the least expensive 5-axis robot arms on the market. What I actually found was a robot with more capability than competitors that are exponentially more expensive, and even some technology that you won’t find in any other robot no matter what the price.

If a massive corporation like anautomobilemanufacturer outfits their assembly line with millions of dollars worth of new robots, it’s a sound investment. The efficiency of the robots and the quality of their work ensures that the company will make their money back many times over. But, even the cheapest industrial 4-axis SCARA (Selective Compliance Assembly Robot Arm) robots cost tens of thousands of dollars — putting them out of the reach of small companies, organizations, and individuals. 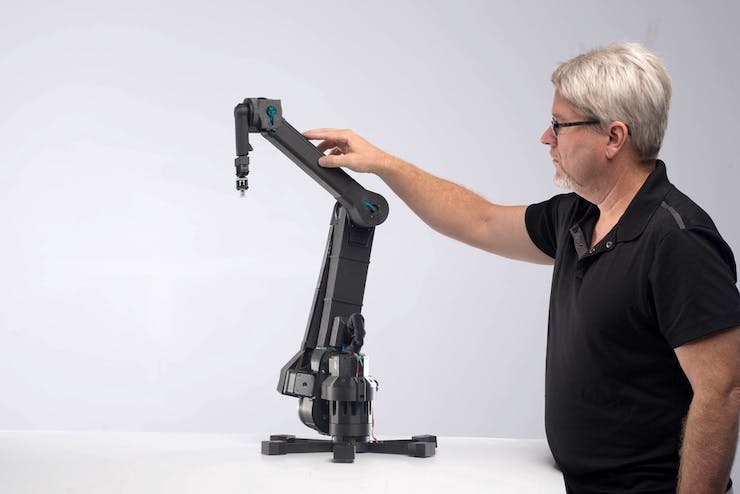 That’s why Haddington Dynamics designed Dexter to bring cost-effective robotic automation to the masses. It takes advantage of the proven power of the open source community for development and testing. It’s constructed from3D-printedparts, so that new designs can be rapidly implemented without the retooling costs associated with traditional mass production. And, most importantly, it uses innovative technology to perform at a very high level.

The secret to Dexter’s performance is the use of a specially-designedFPGA supercomputer— coincidentally manufactured by Hackster’s parent companyAvnet. Haddington Dynamics co-founder Kent L. Gilson is no stranger toFPGA technology. He’s the creator of Viva, which is a programming language and operating environment designed specifically to utilize the power of FPGAs for supercomputing. With his globally-unique skill set, he has brought that capability to robotics with Dexter.

That’s vital, because FPGAs are uniquely capable of using parallel processing to simultaneously work through huge amounts of data. An effective robot needs to be able to do two things really well: know its exact position in space, and move with very high precision. The cheapest robots, like toys and even 3D printers, don’t even monitor their actual position — they just tell the motors how much to move and trust that everything will end up where it should be. Any small deviation will result in inaccurate positioning, and the results are cumulative. 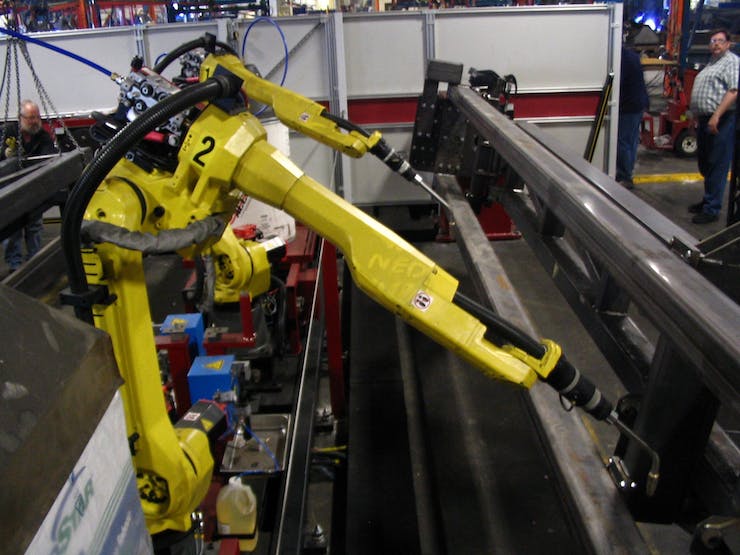 High-end robots address that with feedback fromoptical encodersthat verify their actual position. Ideally, those optical encoders would be placed on each of the robot’s joints and have a high enough resolution to determine the joint angles to just a tiny fraction of a degree. But, that resolution — particularly when it’s being polled thousands of times a second across multiple axes — creates too much data for any microcontroller or processor on the market to handle.

To get around that limitation, most robots today have their optical encoders located on the motors. Those motors are then geared down in order to achieve the precision they require. An optical encoder with 200 steps that’s placed on a motor that has been geared down to 50:1 could theoretically know its joint angle down to 0.036 degrees. But, gearing the motors down makes them slow, so the designers have to balance precision with speed, or use expensive transmission systems to switch between fast movement and accurate movement.

Thanks to the massive parallel data-processing capabilities of Gilson’s FPGA design, Dexter doesn’t sacrifice either speed or precision. Dexter’s optical encoders are placed directly on each joint, and have resolutions that aren’t possible with any other control system. The angle of each joint is monitored down to one second of arc, which is 1/1,296,000 of a full rotation. The FPGA has enough horsepower to poll 2 million samples per second, so Dexter always knows exactly how it is currently positioned. Put into practice, the team measures the repeatability conservatively at 50 microns (0.05mm). The only reason that’s not higher is because of structural rigidity limitations and play in the gears, which they’re improving.

That groundbreaking feedback and control system makes Dexter fast and precise, and eliminates all of the sacrifices made by other robots on the market — even those that are orders of magnitude more expensive. The very high polling rate also makes it possible for Dexter to behave in ways other robots can’t. For example, if you accidentally bump into a Dexter robot while it’s operating, it can immediately respond by either moving back into position or to a safe location. It can do that in just a fraction of a second, which dramatically improves operator safety.

The best technology, however, is technology that you never have to think about. Most people don’t know or care what’s going on in the brain of a robot, they just care what it can do. That’s the real beauty of Dexter, because it can utilize that revolutionary control system to perform just about any task you ask of it. Co-founder Todd B. Enerson refers to this as HDDM (Heterogenous Direct Digital Manufacturing) — a multipurpose system that can seamlessly switch between specialized jobs, and do them just as well as any dedicated tool. 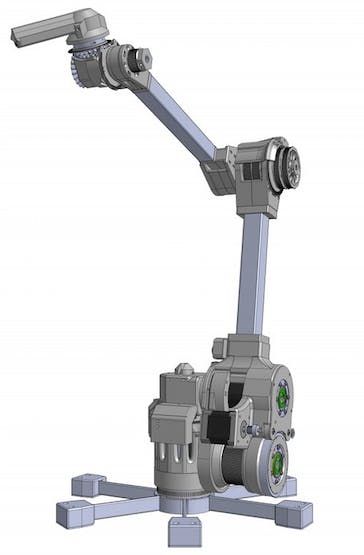 Imagine the next generation of 3D printer that can place bearings and nuts mid-print, and use pick-and-place end effectors to positon electrical components, then go back and mill the part for a perfect surface finish, and finally measure the finished part for quality control. Dexter could, potentially, do all of that by simply swapping end effectors as necessary. New, very specialized end effectors could be developed and shared by the open source community. The technology is there, it’s just up to your imagination how you choose to use it.

The accompanying software has everything necessary to make that all possible. Non-programmers can utilize the trainable routine system to manually pose the arm in a sequence of positions, which Dexter will then reliably mimic. Programmers can use the JavaScript and a block-based programming environment to explicitly define a series of actions. Dexter can even assist you in real time with a microscope-based controller that has far more precision than human hands are capable of— allowing you to finally solder that SMD PCB.

When I walked into theHaddington Dynamicsoffice, I was expecting to see just another robot arm. But, I left knowing that Dexter is something extraordinary. It’s the same feeling I had when I first saw an early 3D printer in action, and it gave me a sense of potential that I haven’t experienced in years. In that modest office amid the superficial glamour of Las Vegas, I saw a small team of dedicated engineers that have used ingenuity to create something real, and what I truly believe is the next big step inrobotics.