Architecture is broadly about two ideas

The UML specifies component, package, deployment and interaction views among others.

IoT system components use constrained devices with much less functionality then computers. IEEE and other standards use many terms and this is a quick layman's intro to some of them. IoT Devices fall into Full Function Device (FFD) like a Linux based TV Set top box or CCTV device, Reduced Function Device (RFD) like a pollution sensor which does not do ISO layer 2 routing and Limited Function device(LFD) which are motes or smart dust of the wireless sensor network (WSN). IoT Lite-OS like Contiki run on micrcontrollers with full UDP stack under 32Kb of memory.

Motes
Motes<ref>https://computer.howstuffworks.com/mote.htm</ref> are limited function devices (LFD) with sensors and/or actuators and very small memory (32 Kb ) and small compute capacity ( 8 or 16 bit micro controller) and may use energy harvesting techniques( Solar etc) or be passive (RFID) or be battery powered typically for a year or more.
Gateway or Hubs
These take part in packet routing and typically are Linux based devices. Android based smartphones are also emerging as a option. Hubs are used in mesh networks and route packets using same radio and protocols as they receive . 802.15.4based Zigbee and new Bluetooth 5 use mesh approach. Gateway typically connect to the Internet on one side(north side) and may connect to non internet based networks on the other (south ) side.
IoTNetworks

A vast range of methods and protocols are used to connect endpoints. The academic literature call them capillary networks and other terms like proximity networks or field networks and south side networks are also used. In this note we use the newer term IoTNetwork. Some examples of the over 200

Typically in modern system the application provides a user interface (UI) over HTML or a front end Smartphone App. These require a micro-service based server side or user interface less applications. There are new concerns of authentication and authorization and security in this scenario and bots and devices must have thier own identity in the software. The concept of Digital Twin is emerging as a paradigm.

In the old non IoT world we have over 2 decades seen some experimentation from local single user or host based computing to client server , flirted with thin computing and the current dominance of web based. The web approach seems to be a good partioning between roles and capability with presentation being delgated to endpoint devices and server managing data and logic.

The IoT paradigm intially built on the web application concept ( Traditional IoT) but has splintered into variations.Terms are not standerdized but here is one representation.

Autonomus drones inspecting the chimmeny of a steel plant or a robot checking a nuclear plant operate in hostile environment. They may work semi autonomously with no connectivty and a pre planned mission. This is "EndPoint Computing". When the gateway can host the application and complete the transaction we have an example of Edge computing.In these cases the local gateway and /or device can complete the application processing. Fog computing implies multiple places where computing happens and may be on gateway, on premise servers as well as cloud servers.

Broadly significant work is being taken away from cloud or back-end server application to IoTPlatforms or to gateways. Fog computing is being seen in many scenarios.

The telco world has long broken functionality and features as

in IoT systems a similar differentiation has not yet become common and depending on purpose we see fluid intermixing of physical components, software functionality (Modules or sub systems) and horizontal concerns like security and trust.

Infoq has a deep apporach to building context for intelligent devices Jonas Berge focuses on Industrial IoT and interoperability and talks about a data diode controlling control plane and providing security.

Naveen Balani at Accenture has proposed an Enterprise IoT Architecture 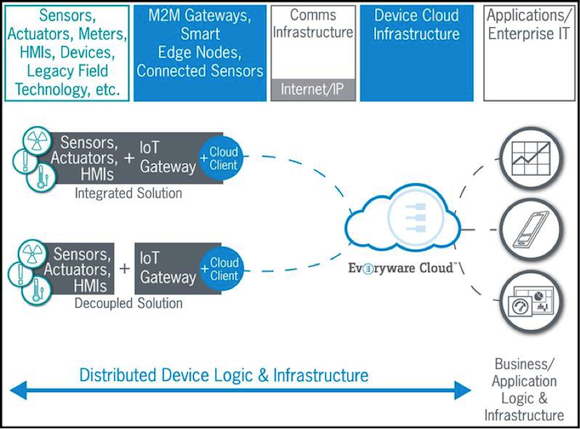 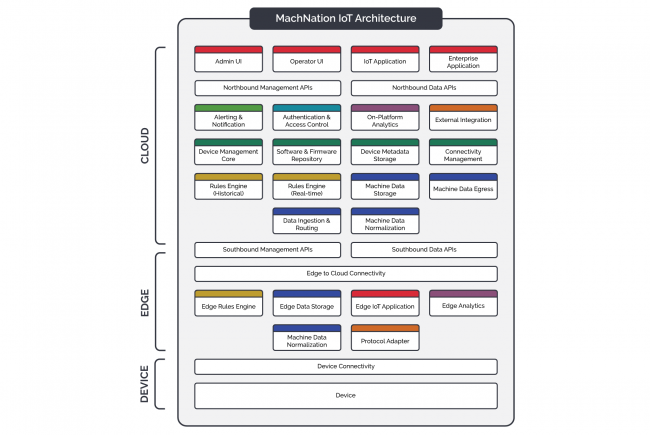 The Cosultancy Zinnov has a CXO level view of IoT Architecture 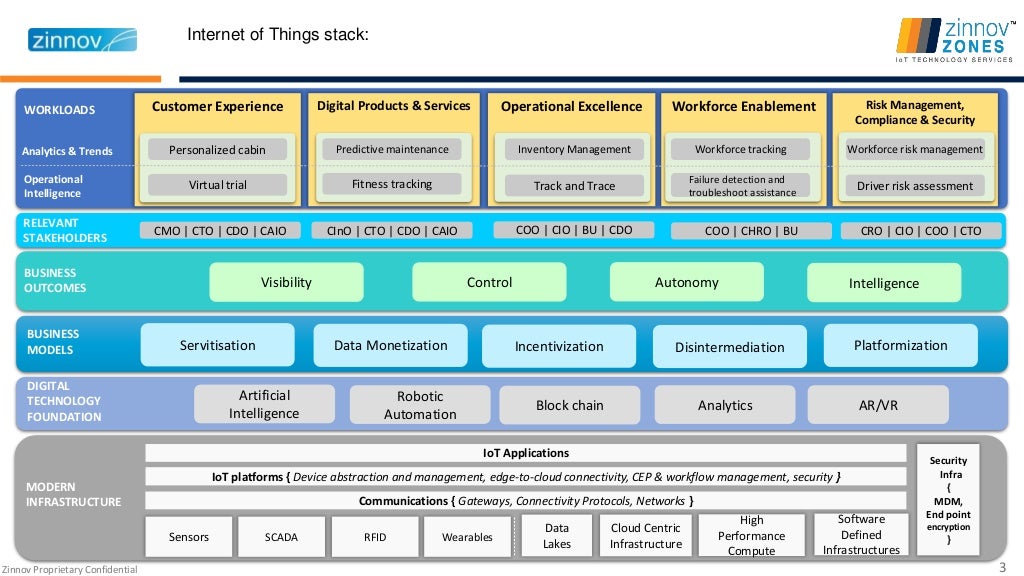 A deployment oriented architecture from a multi vendor mix and match approach for SmartCity etc. Distinguishes application from touch-points and gateway less use cases where device connects directly to (cloud) application. 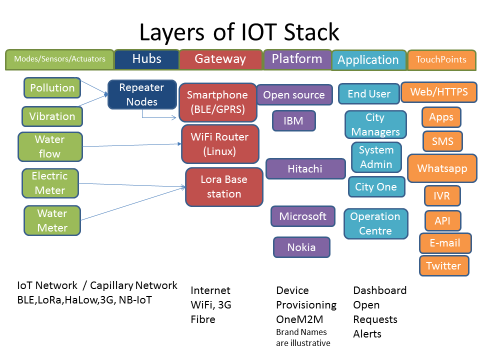 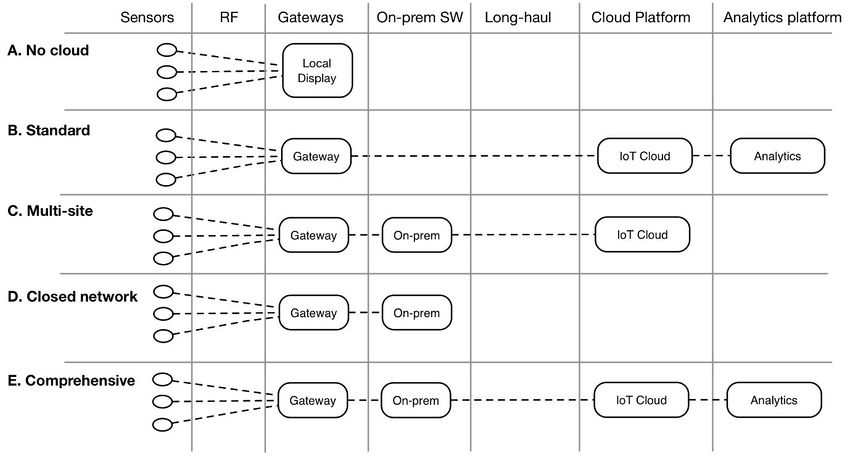